The spectra from soft back samples of carpets were collected once from the shag side and once from the back side to simulate a real life situation where pieces may face the spectrometer either way.  The spectra from yarn samples was collected once, without any attempt to create a reproducible packing density, again assuming that in real life yarns will be presented with variability of the conditions.  The hard waste in form of chips, flakes or pellets was loaded into petri dishes and spectra was collected in a static mode for a fraction of a second (10 scans).  This condition creates spectra collection that is more difficult to use because it represents a smaller number of pieces.  In real life the situation will be better because the sample will be moving and the spectrometer will collect spectra on a larger sample.
III.  Results

Figure 2.  Absorbance spectra from soft back and yarn samples of N66, N6, polypropylene and PET. 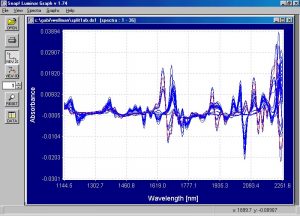 Figure 4.  Absorbance spectra from solid waste samples. The spectrum from the sample PPSC002 (PET clear film) is the one on the bottom, showing the “sinusoidal” shape that is typical of interference fringes behavior. The second spectrum from the top that shows very flat response is the one from sample NXBC002, the high carbon containing nylon.
The spectra basically are similar to that of the soft waste and the physical shape of the samples and the differences in packing density do not affect the ability to collect acceptable spectra. The only difficulty experienced with the hard waste was with the samples that contained a high degree of carbon powder because these samples absorb the NIR light very strongly. As a result, the conditions that are suitable for collecting from regular waste are not adequate for those with carbon filler. The other type of sample that created problems was the fine sheet film.  This sample responded as expected with spectra that show the phenomenon known as “interference fringes”.  It is possible that if such waste becomes very dense due to packing pressure in the container, this issue will be resolved. If not, other approaches will be examined to resolve the issue. 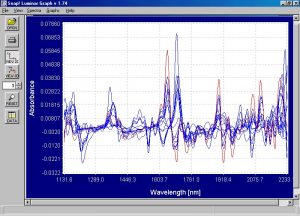 Figure 6.  PLS 1 regression model of the arbitrary values for the different polymers.
The standard error of prediction (SEP) is only 0.16, indicating a very good regression.  Considering the fact that there were only a small number of PP samples, the “drift” of the PP samples to the left of the line can be understood.  A larger number of PP samples are needed for a better regression.  Despite this, the distinction between the PP, PET and nylons is complete. 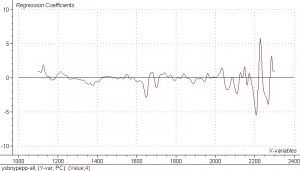 Figure 7.  Regression coefficients for the regression shown in Figure 6 above.

Table 1.  Prediction of unknown samples on the basis of regression between the nylons as one group.

The predictions of all samples were correct. However, because the chemical differences between the two nylon types (6 and the 6,6) are much smaller than the differences between the three types, it is not realistic that a general model covering all three polymers will predict between the two nylons.  In order to verify the validity of the method for these two types of nylon a sub-set of samples containing only nylons was created.  In this set, nylon 6 was given a value of 1 and nylon 6,6 was given a value of 2. A regression model was created and the result is shown in Figure 8 below.  The SEP is only 0.145 and it is definitely indicative that distinguishing between the two nylon types is feasible with high degree of reliability.  To test the reliability of the method, several sets of “unknowns” were created, by removing some samples from the regression. These “unknowns” were then predicted along with the real unknowns. Figure 8.  PLS 1 regression model of nylon 6 and nylon 6,6 samples. The SEP is only 0.145. The results suggest that distinguishing between the two nylon types is very feasible.

The results for this model were excellent.  The SEP is very low and indicates that separating the two nylon types is definitely feasible.   Several sets of artificial unknowns are shown in the table below.  With the possible exception of sample Y004, all the predictions are correct.  It is very possible that this sample was mislabeled as Nylon 6,6 when it was actually Nylon 6.

This table shows validation sets 1 through 5. The real unknowns are listed first and they were predicted very reproducibly in all 5 sets.

Table 2.  Prediction results of real unknowns and artificial unknowns based on 5 sets of regressions where the unknowns were kept out of the regression and predictions were made using the model.  A V sign stands for correct prediction of a real unknown. A + sign stands for correct prediction of a known sample that was treated as an unknown by keeping it out of  the calibration set.
One can see that sample Y004 was labeled 6,6 and it was predicted twice as 6, using two different sets of artificial unknowns.  It is possible that it was mislabeled and should be checked again.
B. Hard waste

The hard waste spectra, without the spectra for the very dark nylon pellets, and the thin clear film that produced the poor spectra discussed above was subjected to chemometric treatment. The result is similar, and despite the large differences in the physical shape of the samples, from chunks to flakes, the regression only required 2 PC’s. It is obvious to Brimrose that a larger sample set will give even better results. 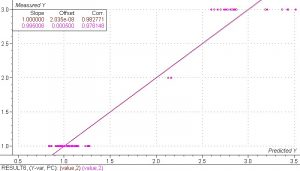 Figure 9.  PLS 1 regression model of the nylon (6 and 6,6), polypropylene and PET with arbitrary values of 3, 2 and 1 respectively. The SEP is only 0.18, and only 2 PC’s were used.
Due to the small number of samples of nylon 6 among the nylon samples it was not possible to perform a separate regression to show the feasibility of distinguishing between the two nylons. However, it is expected that the results will be similar to the soft-back. From an operational point of view, it is preferable to have the large chunks hard waste shredded prior to presentation to the spectrometer simply because it will provide better spectra.
IV. Conclusions and Recommendations

It can be concluded from the results of this experiment that it is definitely feasible to separate and identify these types of polymers using the Brimrose AOTF-NIR spectrometer.  The nylons can be separated from the PET and PP and the nylons can be separated from each other using separate regression models.  The speed of the Brimrose instrument will enable the identification to be done quickly, most likely at a rate of 3-5 times per second on waste moving in a chute.   A Brimrose Free Space spectrometer can be installed on a chute where the waste is being loaded or unloaded as the waste is moving.  The results can be displayed on a monitor in the operator’s control room.  A Macro program can be written that when used with the Brimrose SNAP! Software will enable the design of alarms for when the presence of an undesired polymer mixed with a desired polymer exceeds a certain level.